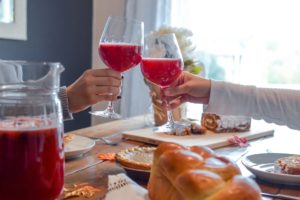 Not all days are same in our respective lives- some are easy going while some tough, some days seem to pass too quickly and some days refuses to see the ‘sunset’, one brings us cheers and joy while some bring monotony. Despite every possible outcome, we should be thankful enough to embrace all the uncertainties of life and try to celebrate each day with positive energy. One of its kind, a day like this is celebrated widely in some parts of the world (mainly America!) which is literally called as Thanksgiving day. It is also considered to be a holiday and celebrated enthusiastically amongst commoners.

The History of Thanksgiving Day and How it’s Celebrated Worldwide

It is believed that this was first celebrated in the 16th century and 17th century in the provinces of Canada, United States, Liberia, France, Virginia, Germany and some other parts as well. The main tradition behind this festival was to observe prayers and dedicate thanks to the lord for the harvests and kindness that he bestows upon his servants. In Canada and united states, this day is observed as a national holiday. The fixed date for Thanksgiving in Canada is October month’s 2nd Monday and in united states, it is November month’s 4th Thursday. And for other states, it’s almost at the same time.

What do people actually do on this day?

In the midst of showing off and bragging about life, people forget about the inner peace that is needed in living a healthy life. A day full of heartfelt wishes, prayers, feasts, and blessings – this day is celebrated graciously among people of these places. The famous dish that is associated with this day is mainly turkey- roasted and crisped! Other traditional foods are also served along with it like mashed potatoes, cranberry sauce, stuffing, Brussels sprouts and sweeteners such as molasses, marshmallows and brown sugar. Native Americans enjoy these sumptuous meals throughout the thanksgiving day.

In today’s ‘oh-so-busy’ lives, we hardly take some time out for friends and family to acknowledge their presence and contribution to our lives. Doing it daily might seem tough and so one day is designated for contemplating the same- but is it worth it? The daily struggles that the near and dear ones go through to give us a life worth of living, thanking them for just a day should not something we look forward to. Thus, Thanksgiving day should be cherished daily in our lives by showing small gestures of love and care towards them. Not only human beings, but heartfelt thanks should be offered to the Almighty also- just for everything!