A trip to India means traveling through a land where cows are sacred animals, where the Ganges is the holiest river and at the same time the dirty river where you will meet beautiful, large and very clean temples on every corner of the road. Which places should you not miss in India, also known as the land of the “holy animals”? That is a difficult question. Our team of India experts has pooled their knowledge and created a list of things that we think you should not miss off. 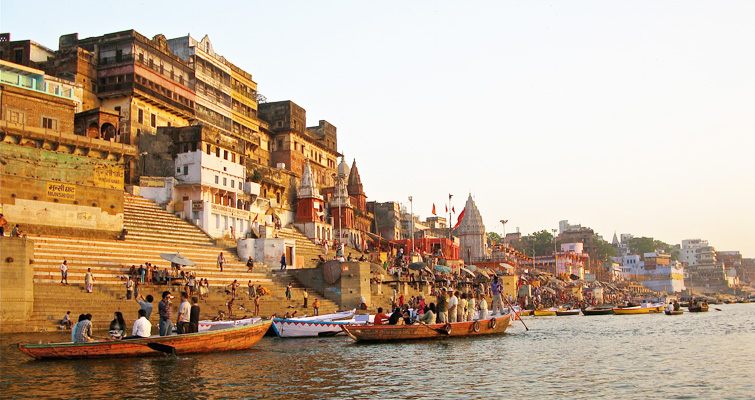 Follow the Ganges, the spiritual lifeline of India. You drive to Haridwar in about five hours by private car. This is one of the seven holy cities of India. It is the place where the holy Ganges leaves the mountains and flows into the plains of North India. The old name is, therefore, Gangadarwa (the place where the Ganga flows). Haridwar itself means the “gateway to the land of God.”

You travel to Allahabad, where you change to the (public) boat to Varanasi. You will take a boat trip of about three and a half hours (40 kilometers) across the Ganges. It is wonderful to arrive in Benares (the old name of Varanasi) in this way. For Hindus, it is India’s holiest city located on the sacred river Ganges.

Every Hindu wants to take a cleansing bath in the Ganges here at least once in his life. Life also takes place in and along the water at the Ghats. Pilgrims bathe here, boys play cricket, Saddhus meditate and cremates are cremated on the stairs, and their ashes are scattered in the Ganges.  At Dasashwamedh Ghat you can witness the Ganga Aarti which performed daily in the evening. This is also one of the major attractions of Varanasi. 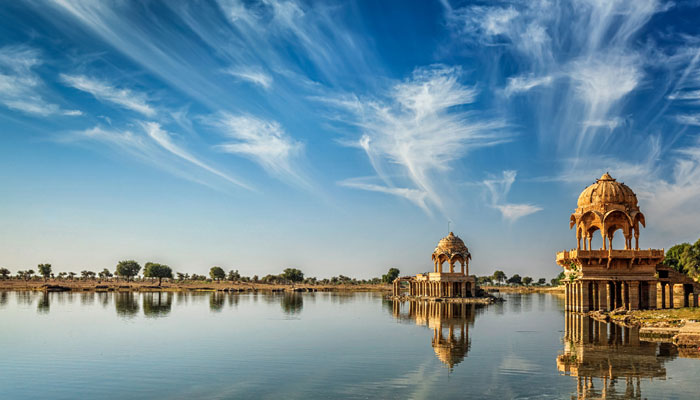 The most impressive region of India is undoubtedly Rajasthan. Beautiful cities in the desert, exotic palaces and majestic forts. This fairy-tale picture of graceful women in colorful saris and lusty men with turbans and huge, rolled-up mustaches. You may think of yourself as a maharaja in ancient times when you experience this region with all the comforts. Visit the famous cities of Udaipur and Jaipur, visit Jaisalmer face to face with the desert, see the imposing forts of Jodhpur and Bikaner, visit the sacred Pushkar and conclude this journey at the world’s most famous building; the Taj Mahal.

Red Fort is one of the famous monuments of Delhi.  This is the oldest and the most visiting tourist spots in Delhi. Red Fort is also known as Lal Quila which was constructed by Mughal Emperors – Shah Jahan. It is also famous as UNESCO World Heritage Sites in India. At Red Fort Sound & Light Show held every evening which describes the history of Mughal Emperors and Ancient India.

Gateway of India is the famous most popular tourist attraction in Mumbai.  This is one of the most unique landmarks of India located in Mumbai. It is popularly called as ‘Taj Mahal of Mumbai’. 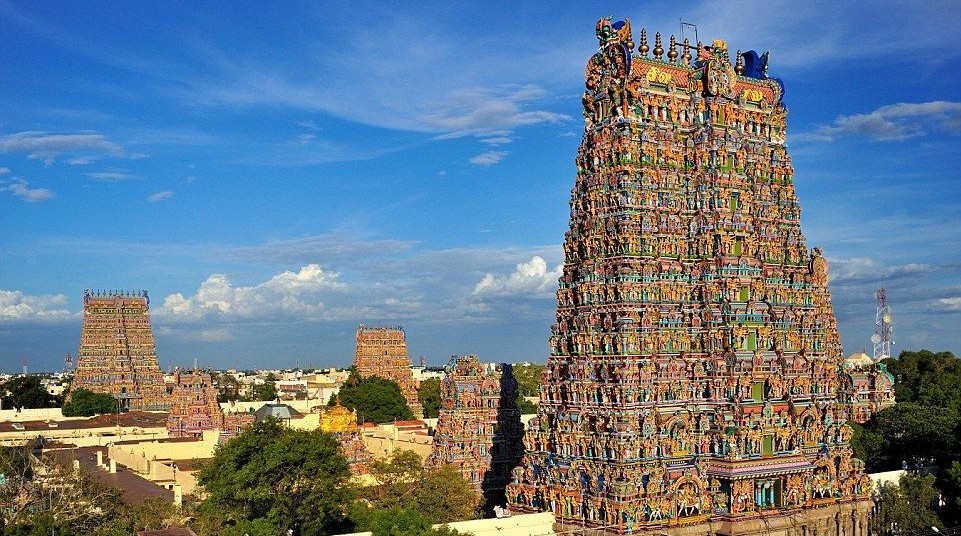 Visit the magnificent temples of Bangalore, Madurai, Tanjore, Pondicherry, and Mysore. In Madurai, be sure to visit the evening ceremony at Meenakshi Temple, known as ‘Bedtime for God’. This temple was dedicated to Lord Shiva and the goddess Meenakshi. The temple was designed by Vishwanatha Nayak in 1560 and built by Thirumalai Nayak during the reign of 1623-1655, but its history dates back to 2000 years when Madurai was the capital of the Pandya kings. There are 4 entrances to the temples and 12 towers between 45 and 50 meters high. The temple is famous for its 1000-columned hallway. For centuries it has been the center of Tamil culture, art, dance, and music. A monument listed on the UNESCO World Heritage List. 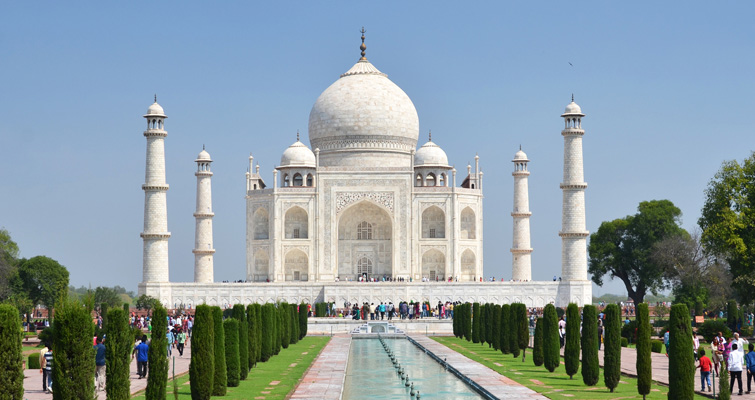 The Taj Mahal is one of the seven architectural wonders of the world and is considered the culmination of Mughal architecture. The complex is surrounded by a beautiful garden where families like to be photographed with their favorite building in the background. In the morning you have the opportunity to experience this particular building at sunrise. This is the best time to visit with the sunset. The walls are now light pink-orange.

7. The beaches of Goa

Perhaps the most famous beach (or beaches, there are several) in India is that of Goa, the former Portuguese colony. Here you can laze, swim and enjoy the beach life. If you prefer to do something, visit the Portuguese Cathedral and walk the streets of the city. Or rent a bike and explore the countryside of Goa. Of course, Goa is best known for its fantastic beaches. But this little Indian state also has a rich past. It is a former Portuguese colony. In the 16th century, Goa became the capital of Portuguese India. The Portuguese were particularly interested in the spice trade. Many cathedrals were built, of which one can still visit today.

Travel to one of the unknown corners of India. A unique region; many traditional tribes, ancient headhunters, nature parks and Buddhist monasteries in the hills that stretch from the Brahmaputra River to the Himalayas. Nagaland is one of the “Seven Sisters,” as the northeastern Indian states are called.

The environment is beautiful and untouched. Mon is the main city in the northern part of Nagaland, inhabited mainly by tribes of the Konyak Naga. Before you reach Mon, you can visit one of the villages, for example. Phuktong or Wakching. Around Mon visit the Konyak Nagas. Here are some villages of the former headhunters. They have face tattoos and have big horns in their ears.

The Konyaks are still ruled by chiefs, known as Angh. In the southern part of Nagaland, you will probably immediately notice that everything looks cleaner and neater than in the pristine north of the state. The many churches testify that Christianity has taken a firm footing here.

The Tibetan government is in exile here and the Dalai Lama is resident here. Although Dharamsala is known, most of the Tibetans and tourists live in the McLeod Ganj above. The city of Dharamsala has a true Tibetan atmosphere with many monasteries, prayer flags, and prayer wheels.

You can make beautiful walks in the area, where you will come across the British past. For example, visit the Namgyal Monastery of the Dalai Lama or the small but fine Dip Tse Chok Ling Monastery located below the Om Inn. You can also take a nice walk to a waterfall near the Hindu village of Bagsu, where there is also a Hindu temple. The Tibetan SOS Children’s Village with more than 3,000 children is located in the mountains, near the Dal Lake.

Munnar, a beautiful and unspoiled mountain station in the Western Ghats. There are gum, cardamom, tea and coffee plantations here. For example, you can spend the night in a country house overlooking the Munnar, beautifully situated at 1600 meters, providing a welcome break from the hot plains. Not for nothing, it was the favorite place of the British rulers in the colonial era. Enjoy the tranquility of the estate that is fully in harmony with nature. The restaurant is built from natural materials such as palm leaves and elephant grass. For example, you can take a trip to Eravikulam National Park or just stroll through the pretty tea plantations.

How to Find the Perfect Hotel for You: Tips and Tricks

Top 5 Activities To Do In The Neighborhood Of Nob Hills, CA