As an American citizen, you must be aware of the significance of displaying the flag in your home. Having the American flag in a home is more like showing respect, honoring, and respecting the efforts past heroes made for the nation. This is a major reason why people (especially those who are in the military or those who wish to respect their country) consider investing in various forms of the American flag.

Nowadays, a rising trend is to buy wooden American flags & paintings, which not only look great but also add a rich patriotic touch to homes. However, one thing for sure is that many people are not actually aware of the facts and myths that follow the flag they display in their home. Just like every other important element in our history, the American flag also has some rumors and myths that tag along with it, and unfortunately, many people believe them.

Some myths say that burning the American flag is an illegal act. If the flag touches the ground, do you have no choice but to get rid of the flag? Is it true, Betsy Ross is the mastermind behind the very first version of the flag? 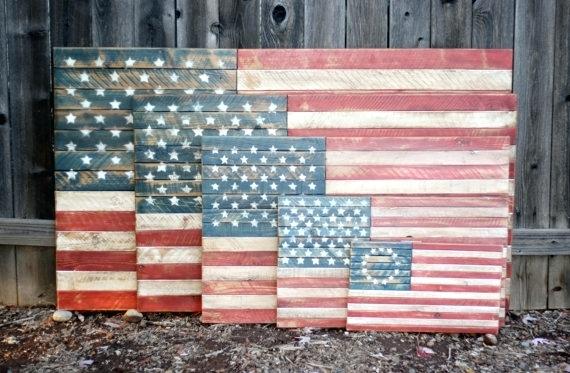 Here’s clearing some rumors or myths about the American flag.

In America, many people believe that the mere act of throwing the American flag is a highly disrespectful one and shows poor etiquette. Doing so is more like showing you do not appreciate all the efforts that soldiers made for the freedom of their country.  However, you should know that throwing the flag away has nothing to do with being illegal. In fact, the flag code states that one of the preferred ways to discard the flag should be with respect and dignity, and it is best to burn it.

Burning the flag is more like a type of desecration of the flag (an act of intentionally, publically, mutilating, destroying, or damaging the flag), but this isn’t illegal. There was a period when burning the flag was an illegal act, but in the year 1990, on June 11, the supreme court declared that all the laws surrounding the desecrating of the American flag are something unconstitutional. In addition, the first amendment also states that it is an unconstitutional act for the government, whether local or even federal to restrict the desecration of the American flag since it is more like a symbolic speech.

In most cases, if at any time, the flag appears worn out or it doesn’t serve the country’s symbol, the very best option here is to burn the flag with respect.

2.     Maintaining or Cleaning the Flag is prohibited

When it comes to this, just know that it is a clear rumor. There is no actual rule or evidence that shows this is true. If your American Echoes handcrafted wooden flag is dusty or appears dirty, you can take your time to wash and clean it. This does the magic to keep the flag clean, and if it is a material, you can consider washing it too.

While several tourists spend money on taking a tour and visiting the Betsy, Ross shop at the Betsy Ross House in Philadelphia, so many people are not actually aware that there’s no historical evidence as such that says this rumor is true. Yes, although many regard her role in making the flag, this is just a myth. Even though some people believe that the story is true, several others agree that the story is not true until William Canby, her son made the legend popular in the late 1880s.

4.     Reciting of the Pledge of Allegiance was Always in Congress

This is not true. The Congress has been reciting the allegiance pledge for 25 years. The first began doing it for political reasons, especially during the presidential campaign back in 1988. Originally, Colonel George Balch back in 1887 was the first to write the pledge, and it went through revisions by Francis Bellamy, Baptist minister back in the year 1892.

As you may already know, each star on the American often represents 50 states of America. This often leads to a popular rumor that it’s not right to display a flag that has just one star, but it must have 50 others. Just know that the American flag is not really obsolete, meaning an approved flag can fly freely with honor, regardless of the number of stars and stripes that it has.

As you can see, no matter what rumors you hear about the American flag, the next time you invest in wooden American flags & paintings, you should ensure that you do not believe the rumors. Always research well on your own too and learn about various other myths or rumors as well.

What is the Environment Definition?

5 Money Mistakes You Should Avoid According to the Bible